Ladakh shows Russia won’t choose between India and China. It doesn’t want to 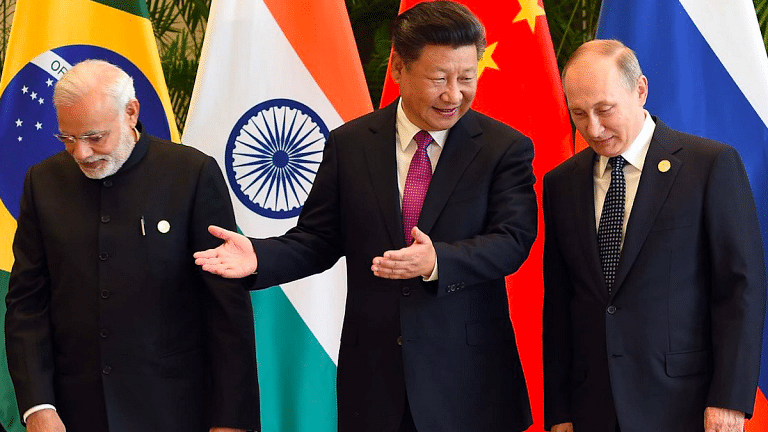 Back in September 2020, when the Russians hosted India’s external affairs minister S. Jaishankar and his Chinese counterpart Wang Yi on the sidelines of the formal Russia-China-India meeting, many, including me, applauded. It was hoped that the face-to-face meeting would help break the deadlock over the Ladakh crisis, enabling both Indian and Chinese troops to withdraw to their respective sides of the LAC and allow their leaderships to save face.

The Russia intervention, I argued, would help return Russia front and centre to India’s imagination. An old friend would use its good offices with a new one, and persuade it to see the light. Even if the Chinese claimed this territory, there was much merit in discussing the matter; after all, China has been party to several agreements on maintaining peace and tranquility on the Line of Actual Control (LAC), which it unilaterally violated by sending troops to Ladakh.

How wrong we were! Not only did Russia not once comment on the Ladakh standoff, it now transpires that it won’t in the future either. Russia will not choose between India and China because it doesn’t want to, head of the Carnegie Moscow Center Dmitri Trenin told me. Russia looks at the world differently, Trenin added, compared to Delhi or Washington DC or Beijing, pointing out that it was in Moscow’s interest to encourage a multipolar world in which several powerful axes, besides the US, existed.

First, the lay of the land. China will overtake the US to become the world’s most powerful economy by 2028, says a UK consultancy group, five years before it was expected to because of Covid. The pandemic has hit the Americans hard, leading to 419,000 deaths and the economy contracting by at least 5 per cent. GDP is likely to decline by 4.4 per cent, the worst since World War 2. China, on the other hand, will likely grow by 2 per cent.

If the penny hadn’t dropped in the minds of the Indian intelligentsia so far, it should soon. Fact is, Russia is hugely invested – and dependent – on the China bond. Russia is China’s biggest arms supplier, accounting for 70 per cent of China’s imports from 2014-2018 – although the Stockholm International Peace Research Institute now says that China has overtaken Russia to become the world’s second-largest exporter of arms (US is still on top).

The Russia-China export basket is heavily skewed in favour of energy, as much as 70 per cent, and includes nuclear power systems, aircraft as well as a missile warning system that Russian President Vladimir Putin announced it was helping Beijing to build. One full decade ago, China overtook Germany to become Russia’s largest trade partner. Russia-China bilateral trade had crossed $110 billion before the pandemic – China’s share increasing from 10.5 per cent in Russia’s total trade in 2013 to 15.7 per cent ($34.1 billion) in 2019 to 17.3 per cent ($31.8 billion) in early 2020.

In fact, the US-China trade war gave Russia the opportunity to export large agricultural products to China. The Moscow-Kazan high-speed railway, even if it has overshot its budget several times, is being built with China’s Belt and Road Initiative (BRI) funds. China’s AliPay will soon be offering digital payment services to Russians. Seven of China’s eight long-distance international terrestrial cables pass through Russia. Russia bought Huawei equipment to conduct its 5G trials.

India-Russia, on the other hand

Contrast this with the plummeting India-Russia economic relationship – or its refusal to take off since the end of the Cold War, 30 long years ago. Bilateral trade for January-September 2019 figures are less than $8 billion, while 2018 figures are within kissing distance of $11 billion. Top items for import from Russia include nuclear reactors, mineral fuels and cultured pearls; top items of export include pharma goods, organic chemicals and vehicles other than trains.

You can see what’s going on. US sanctions on Russia as well as its determination to paint Putin as the bad guy is driving Moscow into Beijing’s arms. Not that Moscow is a victim, not at all. Putin, who took charge of Russia in 1999 after eight years of unprecedented economic and social chaos that reduced Russia to a banana republic with Third World economic woes, realised he needed the Chinese to climb back to at least semi-big power status.

Make no mistake, this is a willing embrace. Putin thinks he knows where to draw the line, that he is in full control of the passion index, and that Russia isn’t in any danger of becoming a vassal or junior partner of the Middle Kingdom. Of course, one way to disprove that perception among old and tried and tested friends, like India, is to show that you care in areas where it matters.

The crisis in Ladakh is one of those areas. For India, it matters on which side the cookie – or the Borodinsky black bread – crumbles. Can Vladimir Putin disprove Dmitri Trenin, who has proclaimed to ThePrint and the world that “Russia won’t choose between India and China”?

If not, then the coming months are going to be as predictable as one foot following the next. China – and Russia – will push Delhi to draw closer to the “free world.” Yes, we are going to begin speaking like them too.